Hiya, folks. Today I've turned over my blog to an absolutely wonderful author whom I had the pleasure of meeting in person at the 2014 World Horror Con in Portland. I hope you enjoy this post as much as I did.
***


Hello, my name is…
Loren Rhoads

My mother was a librarian, so I grew up surrounded by books.  Once she showed me where the science fiction shelf was, I’d sit down and work my way through it.

It didn’t take long for me to notice all the writers (in those misty, far off days) were men.  Even the few women wrote under male names: Andre Norton, C.J. Cherryh, James Tiptree Jr., and the ambiguously gendered (to me) Leigh Brackett and Marion Zimmer Bradley.

The message I took from it was that women were welcome in small numbers, as long as they passed socially as men.  It was a message I had already internalized. I never felt like my given name fit me.  From an early age, I called myself George – long before I knew that was the nickname of Nancy Drew’s female friend.

I could dress up with the other girls, put on lipstick and curl my hair, but it always felt like a costume, a show of femininity.  I never felt male, really.  I just never felt traditionally female, either.

I chose my new name before I applied to Clarion.  Loren summed me up.  It was a masculine form of a name when written, but when heard, the gender was ambiguous.  People could guess which gender fit, according to their preferences, but when they met me, they needed to reconcile the gender of the name with the obvious gender of my body.

I understood that science fiction was, at that time, written about men.  So I wrote about the men I knew, my gay friends from high school.

The story that got me into Clarion was about a transgender prostitute named Tolly.  Thomas Disch, one of my Clarion instructors, was extremely disappointed when he met me and my gender didn’t match his expectations, based on the spelling of my name and the subject of my story.  The same story, when written by a woman, meant something completely different to him.

Thirty years later, I’m looking at the problem from the other direction.  When my publishers approached me about The Dangerous Type books, they asked if I would consider using a more feminine pen name.  It could be an open secret, like Seanan McGuire/Mira Grant.  They just wanted readers to be able to look at the front of the book and know it was written by a woman.

I got out of that by pointing out I would need to begin my social media connections from scratch under the new name.

It makes me wonder, though:  how much are we really influenced – as book shoppers – by the unfamiliar name on a book cover?  Does gender trump cover art or blurb or back cover description?

Loren’s new novel is The Dangerous Type, first of a trilogy called In the Wake of the Templars.  The other books – Kill by Numbers and No More Heroes – will be published by Night Shade Books before the end of the year.

Enslaved, trained as a killer, betrayed, entombed, and abandoned: you can see why Raena Zacari might have a chip on her shoulder. In the grimdark universe of Rhoads’s propulsive, action-heavy debut, the universe’s deadliest assassin sets off on a mission of vengeance into a galaxy destabilized by genocidal warfare. Her target, the despotic warlord Thallian, is on the run for war crimes but determined to reclaim what he believes is his by right. The stage is set for a revenge tale constructed from a web of complex, strained relationships made messier by two decades of forced separation. 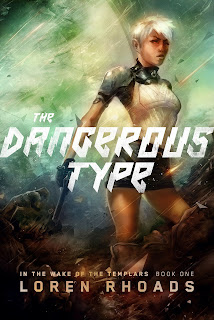