Ladies and Gents,
Today I turn my blog over to the talented and amazing Emerian Rich. Enjoy!
JJ

There’s nothing as horrifying as being betrayed by your family, but in Julien’s case, he’s been down-right tortured.

You see, his father is the Devil. Not only was “Pa” a jerk during Julien’s childhood, but he also killed Julien’s mother, brother, and caused his sister to commit suicide. He tried to kill Julien’s girlfriend, but she put him down.

How did Julien survive it all? He was protected by those above and is destined for something greater…they say. But how can he concentrate his destiny when he is consumed with grief over the loss of his one true love?

In Dusk’s Warriors, Julien must try to pull himself out of a deep despair for the good of all mankind. And if can’t, his father just might kill us all.

Excerpt from Dusk’s Warriors.
Jespa. The name was both heaven and hell to Julien’s ears. She’d brought him to the pinnacle of bliss and then pushed him off the cliff of despair. He’d shattered into a million pieces he knew would never recollect. His soul felt every crack and burn. Although he despised her for leaving him, he couldn’t help but ache for her affection.
Jespa. The name echoed in every dream he had, in every thought while waking, and in his daydreams he heard only her name.
Since his appointment to Lord Dawn, his heart had started beating again. The human organ, which had not worked in centuries, beat. Even that small thing he could not take pleasure in, for every heartbeat seemed to repeat her name. Jes-pa, Jes-pa, Jes-pa. If seen under a microscope, his veins were inscribed with her name. As a New York Stock Exchange ticker tape, her name ran through every corpuscle JESPA JESPA JESPA.
Agonizing thoughts of her leaving woke him in the end. He couldn’t sleep with her image in his head. He was exhausted mentally and emotionally. Exhausted, but unable to rest. The only time he’d not thought of her was in the alley, his fangs extended, ready to feed on the young Drog. Perhaps blood was what he needed? Perhaps blood would bring him peace?

Can Julien recover and fight his father to save all mortal kind? Find out in Dusk’s Warriors. 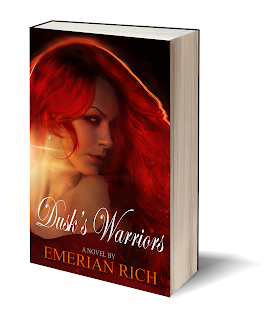 Heaven has opened up and welcomed the vampires of Night’s Knights into a new reality. As they struggle to find their place in their new world, trouble brews on Earth.

Demon servant, Ridge, is causing havoc by gathering up all the souls on Earth that have been touched by immortality. When he injures one of the Night’s Knights crew, he launches a war between the vampires of Heaven, the Big Bad in Hell, and a mortal street gang of vigilante misfits.

Will Julien, Markham, and Reidar be able to defeat the evil that’s returned, or will they once again need Jespa’s help?

“A world of horror with realistic characters in a fast paced thriller you won't be able to put down.”
~David Watson, The All Night Library

“Emerian brought the Vampire Novel back from the dead.” ~C. E. Dorsett, Shine Like Thunder

Available now at Amazon.com in print and eBook 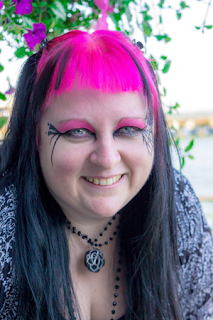 https://www.amazon.com/Dusks-Warriors-Nights-Knights-Vampire/dp/1544628803
Emerian Rich is an artist, horror host, and author of the vampire series, Night’s Knights. She is the hostess of the internationally acclaimed podcast, HorrorAddicts.net. Under the name Emmy Z. Madrigal, she writes the musical romance series, Sweet Dreams and she’s the Editorial Director for the Bay Area magazine, SEARCH. She lives in the San Francisco Bay Area with her husband and son.