Jane The Hippie Vampire takes over!

While she hasn't taken over the world --yet-- she, and her creator Leigh M Lane, are taking over my blog for the day. But, this sort of thing isn't uncommon, as we authors know, sometimes a character can take over everything --especially our imaginations-- until we tell their story. For more on that I give you the indomitable, the amazing, the extremely talented Leigh M. Lane. 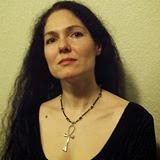 When the Protagonist Takes Over
I don’t know how many times I’ve outlined a story only to find various plot points reconstructing themselves as I go to flesh them out. The same can go for characters: who they are, what roles they play, what type of feel they offer to their stories’ overall tones, etc. Jaime and I were talking just the other day about characters that take over—particularly how Jaime’s Bob the Zombie had begun as a supporting character in another book and how Jane the Hippie Vampire was originally supposed to be a lighthearted reprieve from all the dark and heavy material I typically write.

When I first set out to write about Jane, I only had a few specifics in mind. First, I wanted to present her story as an episodic series of novellas that offered the feel of a mesh of Kung Fu (1972-1975), The Incredible Hulk (1978-1982), and Forever Knight (1992-1996), but also with a slight element of comic relief. I wanted to capture Kwai Chang Caine’s tragic wanderings, Bruce Banner’s desperate struggle against the violent monster raging inside him, and Nick Knight’s seemingly endless search for redemption. I also wanted Jane to be a happy-go-lucky, burned-out hippie whose fish-out-of-water presence in contemporary America would be as entertaining as it was heartwarming.

You can’t always get what you want, however, especially when you’re a writer attempting to write outside your comfort zone. While Jane is indeed all of the above, she turned out to be much darker than planned. The horror elements I’d outlined to be sparse ended up being just that—but also extremely graphic and violent in places. The story arc has grown to include incest, rape, and torture, effectively changing the overall landscape of every outline I’d written for the series. Why this happened is not completely clear even to me. All I can say is Jane took over—and so did nearly every supporting character she’s encountered. Jane has had a rough life, one that has made her horrifying afterlife look like a walk in the park. It all comes together to make an important point about the true dangers that exist in our world: that supernatural threats make for thrilling reads but the real threats out there can be downright terrifying.

This idea begins to solidify in Hair, the upcoming third installment of Jane the Hippie Vampire. While Jane’s encounters in Love Beads and Flashbacks allude to past abuse and include disturbing elements of their own, what they reveal is tame in comparison to that which unfolds in Hair. Her experience in Flower Power, the fourth installment and exclusive release to the upcoming Volume 1 Collection, is even more unsettling. In each story, Jane survives a different, often supernatural, evil, but the greatest evil always exists within the coinciding human elements.
And that, I’ve finally come to accept, is what Jane is really all about.

About the author:
Leigh M. Lane has been writing for over twenty years. She has ten published novels and twelve published short stories divided between different genre-specific pseudonyms. She is married to editor Thomas B. Lane, Jr. and currently resides in the outskirts of Sin City.
Her traditional Gothic horror novel, Finding Poe, was a 2013 EPIC Awards finalist in horror. Her other novels include World-Mart, a tribute to Orwell, Serling, and Vonnegut, and the dark allegorical tale, Myths of Gods.
She recently released Love Beads and Flashbacks, the first two novellas in her dramatic urban fantasy horror series, Jane the Hippie Vampire.
For more information, you can visit her website, “like” her on Facebook, follow her on Twitter, or check out her Amazon author page.