I'm currently editing a novel I wrote a couple years ago. It's similar to Shifters but has its very own interesting cast of characters. Since Zombies are so big right now I thought I would introduce you to Bob. He is a zombie that was inspired by my friend Nate. As I edited this novel that was originally written for my friends at Cellufun I changed a few names and even rewrote large chunks (including the ending) to make the story flow better. Bob decided he had a little side story to share with you guys and here it is. I hope you enjoy him as much as I do. Nate, if you're reading this; don't ever forget that horde equals family! Now on to Bob...

"It's not easy being an Undead American in this day and age. People are always assuming you're just a mindless brain muncher. They think that those of us who have been reanimated are just hollow shells bent on destruction and death. They couldn't be more wrong. I have never hurt anyone that didn't deserve it, and I cook. What does cooking have to do with killing someone? Not a darn thing, but how many zombies do you know that like to work in a kitchen? Exactly.

I really, truly love cooking. It brings me peace and clarity. Trust me, clarity is hard when your eyes have been decomposing for awhile. Also, I do have a tendency to lose the occasional piece of myself. Drats, now Patsy Cline's 'I Fall to Pieces' is running through my head. Anyway, whenever something...detaches, I just staple it back on. The magic that reanimated me uses the iron in the staples to heal my rotting flesh just enough to stick it back together. It's kind of like supernatural superglue. Although there is superglue that has been spelled to work on zombie flesh too, I prefer the stapler. It gets more laughs. I try hard to get people to laugh. I'd like to think that if they laugh with you, they can't fear you. I'd be wrong...dead wrong. (Oh, come on, don't groan. You knew that was coming.)

The staples, or glue, help with the worst of the decomposition as far as looks. Sadly, when it comes to smell that's where I am discriminated against the most. Everyone assumes that just because I am a rotting corpse I have to smell like one. It's called bubble bath, deodorant, and toothpaste, people. The modern age has given rise to some really kick ass zombie friendly ways to...well, stink less. Oh, and I'm totally secure enough in my masculinity to tell you that I take bubble baths. They're really great for making me feel better when I'm dead tired. (Wink.)

I used to use the sauna for relaxing, but I was banned from my health club. They said that I creeped out the other members. Sheesh. Lightweights. I admit there was probably some residual anger from the owner over the time I came out of the sauna and my face slipped down my skull, but I fixed it quickly and no kids saw it. It wasn't like I lost my towel in front of the entire gym, so my face slipped a bit. I tell you serious discrimination exists against us Undead Americans.

It's like the time I was fired from the Cafe DuLac. Apparently losing a finger in the omelet you're cooking is bad form and frowned upon. Like I took it off and put it in the food on purpose! I'll have you know that I very rarely give people the finger. Besides, what do they have to complain about? A little extra meat on their plate? I'm the one who lost a finger. Did anyone bother to ask if I was ok? No. They just sat there and gagged while the chef tossed me out on my ear. Literally. My ear fell off as he was shoving me out the door, I landed on it.

Sorry, I'm supposed to be telling you about the time I entered and won a fully restored, pimped out 1971 Dodge Challenger R/T. I found out about this contest from my favorite radio station and gave it a shot. The 'Challenge for the Challenger' was to keep your hand on the car as long as you can. I'm pretty sure you can guess what I did when I had to pee. Hey, they never said my whole body had to be there, just my hand. Luckily for me, there was nothing in the rule book disqualifying a zombie. Nor was there any rule stating you couldn't rip off your hand and leave it on the car. Ain't semantics wonderful?

Well now, that story didn't take as long as I'd hoped. I guess I could tell you about the time I won the Elvis contest, that's when I learned that chicks dig a dancing zombie. Especially one who break dances. Well, truthfully I more break than dance, but it's always fun. Even if the occasional appendage flies across the room and lands in some lady's martini. Not my fault she didn't find the finger sandwich joke amusing. To be fair to her, I'd probably be creeped out if someone left their finger in my food or drink. I don't think I would have run out of the place screaming, but to each their own. Good thing she wasn't around for the 'handburger' incident.

Then there was the time I was thrown out of Denny's, shit you not. I know what you're thinking, and you're right. Hardly anyone gets tossed out of that place. I managed it by losing my nose in my 'Moons Over My Hammy' breakfast. I tried to make it funny. When the manager came to yell at me I told her it just smelled so good that my nose leapt off for a closer sniff. It didn't do much good, I still got tossed. I hate discrimination. I understand that it probably grossed some weak stomached people out but c'mon, I can't help what falls off where. Believe me, if I could, I would. It'd save me a fortune in staples. I guess what I'm really trying to say is that, it's not easy being green." 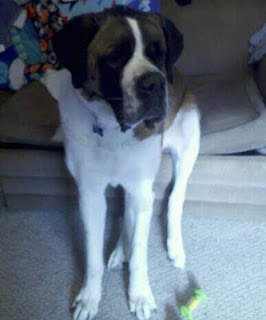 Those of you who know me, know about Mr. B. He's my fuzzy giant guardian and right now he has got it bad for the sweet tempered, adorable, little border collie next door. I mean bad. He howls and whines if he sees she is outside and he will haul his gianormous furry behind at light speed over to the property line to meet her.

She comes over every day and waits in plain view for Mr. B to see her. When I let him out she runs to the treeline and stops just on the other side. Then they chat for awhile, tails wagging and tongues lolling. Little by little she gets closer and closer to him. Each day brings another inch and a few hours of my pup sulking around the house gazing out of the windows looking for Lola.

God help you if you play either 'Lola' or 'Copacabana' in my house. If you play either song Bigs will start pinin' away and running from window to window looking for his furry little love. No kidding. Much like Pavlov's dog, when mine hears the signal he starts drooling. When I say drool, I mean it. The big fellow drools a lot, no big deal he's a St. Bernard they do that, but it's the accompanying whining and trotting around to all the windows that really shows the poor fellow is in the throes of some serious puppy love.